Once in a while there are rumors about upcoming conjunctions of "all" planets, which some people expect to have great consequences on Earth. For example, there was some (unwarranted) panic about the conjunction of some planets in May 2000. This essay explains about conjunctions of planets and other celestial bodies, and that those have no measurable influence on Earth, except for the tides that the Sun and Moon raise.

1. What is a conjunction of celestial bodies?

There is a conjunction of celestial bodies if those bodies are (temporarily) close together in the sky. The picture (taken by the author on 12 January 2001 with a digital camera) shows a conjunction of Jupiter and Saturn. Jupiter is the brightest "star" just right of center, and Saturn is in the lower right-hand corner. The small group of stars to the upper right of Jupiter are the Pleiades, and the brightest star at the left-hand side is Aldebaran. The two planets are about 7 degrees apart.

How close together must the celestial bodies be to be in conjunction? That depends on who you ask. If you think it is only a "real" conjunction if two planets are less than 10° apart, but your friend is satisfied already with 20°, then your friend will see more and longer lasting conjunctions than you will.

If there are more than two celestial bodies involved, then you must decide when all of them are in conjunction. Is that when they all fit within a circle of a certain diameter? Or when the distance between each pair of successive planets (from left to right) is less than a limit value? Or do you use still another measure?

It is clear that the meaning of the word "conjunction" is not very precise. By adjusting your definition you can find few, or instead many conjunctions.

2. What does a conjunction mean?

Only one conjunction in the sky has noticeable influence on Earth, and that is the conjunction of the Sun and the Moon. Such a conjunction happens whenever it is New Moon, and then the tidal forces of the Sun and Moon add up and we have spring tide with on average a larger difference between high and low tide than usual.

Table 1: Tides on Earth Due to Planets

The table also lists the tides due to a person of 70 kg (155 lb) at 1 km (0.6 mi) distance: those tides are even larger than the tides due to any planet! And every time that the distance of that person is divided in two, the tides increase eightfold. The tidal forces due to a person at about 40 m (120 ft) is comparable to the tidal forces due to the Moon. The distribution of all people, cars, buildings, and other heavy bodies within about 1 km (or 1 mi) from you has more influence on you than the configuration of the planets.

Of the four fundamental forces in the Universe, only gravity (and the associated tidal forces) is effective at great distances. If the tidal forces of the planets are negligible on Earth, then the other fundamental forces due to the planets are even more negligible on Earth. In short, conjunctions of planets sometimes provide pretty sights in the sky, but are otherwise of no importance.

3. How can you measure the closeness of a conjunction?

An obvious measure for the closeness of a conjunction of planets is the diameter of the smallest circle that encloses all of the planets, but that circle can usually only be found after a tedious search, and does not depend on the distribution of the planets within the circle.

You calculate the conjunction spread as follows: Determine for each planet that is included the vector of length 1 that points from Earth to that planet. Call the length of the average of all of those vectors \( r \). The conjunction spread \( w \) in degrees is then equal to

with \( \ln \) the natural logarithm. For planets distributed randomly across the ecliptic, with standard deviation \( s \) in the ecliptic longitude, \( w \) equals twice \( s \). For two planets that are close together, their conjunction spread is almost equal to their distance from one another. (The conjunction spread then overestimates the distance by less than one percent for distances less than 40 degrees.)

4. What conjunctions have been and are coming?

I've calculated the conjunction spread (as seen from Earth) for the planets Mercury through Saturn, which can be seen with the unaided eye, for a period of eleven million days between the years −13200 and 17191. To calculate the positions of the planets, I used the DE431 ephemeris of NASA JPL. The conjunction spread during this period shows periodic behavior with main periods of 378.09, 398.88, and 779.94 days, corresponding to the synodical periods of the Earth with Saturn, Jupiter, and Mars. The least conjunction spread is 2.7°, the greatest is 428.3°, and the average is 127.8°.

Fig. 2: Diagram of the Chance for Conjunctions 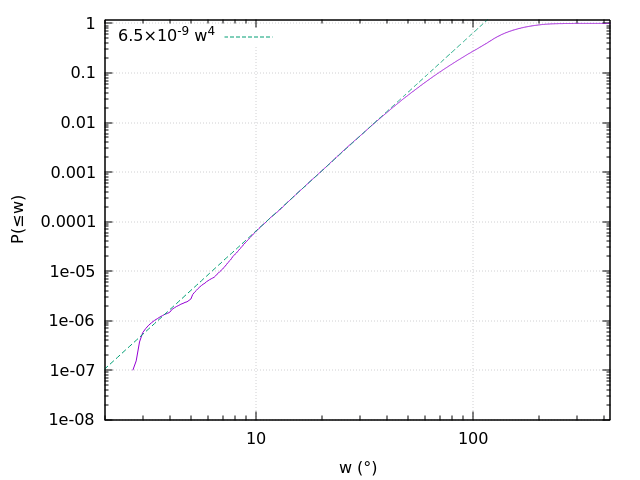 Figure 2 also shows during which fraction of the time the conjunction spread of Mercury - Saturn is less than certain values.

This diagram is a so-called double logarithmic plot. Short and long tick marks are indicated along the horizontal and vertical axes. Each next long tick mark represents a value that is ten times (an order of magnitude) greater than the previous one, as the associated numbers show. To get the values of the short tick marks you should multiply the value of the next left or lower long tick mark by 2, 3, 4 through 9. Then comes another long tick mark which represents 10 times as much as the previous long tick mark. The first couple of values associated with the long and short tick marks starting at the left margin of the diagram are: 2 (left margin, y axis), 3 through 9 (short), then 10 (long), 20 (short), 30 through 90 (in steps of 10), then 100 (long), 200 (short), and so on.

The dashes line shows the results of an approximation formula, equal to 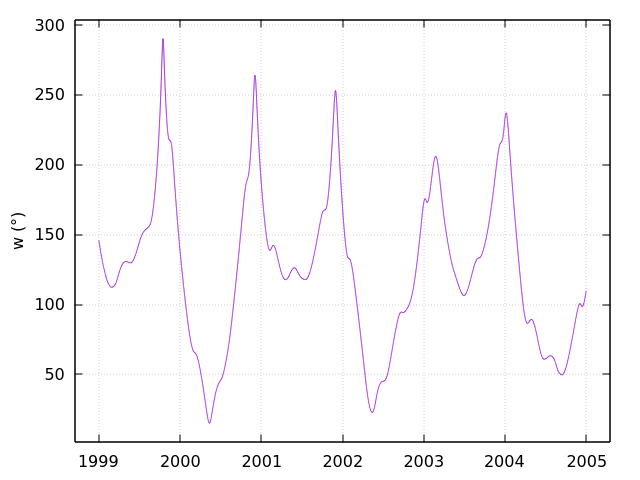 The next reasonably close conjunction occurred in May 2002, with a conjunction spread of 23°. Conjunctions that are as close or closer than that one occur about 27 times per 1000 years during the investigated period (without a clear period of repetition). 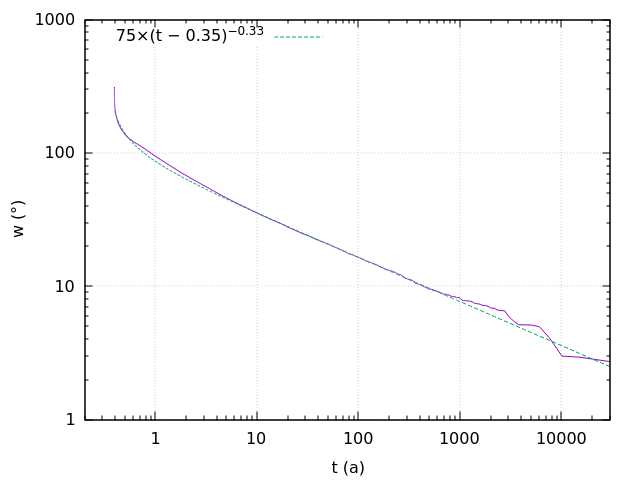 Below is a table with information about the top 30 of closest conjunctions (with the smallest conjunction spreads) of Mercury through Saturn during the years −13200 through 17191:

The column marked "JD" shows the Julian day number. Column "a" (annum) contains the number of the year in astronomical reckoning (which recognizes a year 0; year −2 corresponds to 3 BC). Columns "m" and "d" list the month number (January = 1, and so on) and the day number. The dates are given in the Julian calendar for years up to AD 1582, and in the Gregorian calendar for later years. Column "w" lists the smallest conjunction spread for the conjunction (in degrees). Column "c" shows the location of the center of the group of planets in the sky, relative to the Sun (in degrees). A positive number for "c" means that (most of) the planets are East of the Sun and therefore visible in the evening. A negative number means that (most of) the planets are West of the Sun and therefore visible in the morning (before sunrise). Column shows "r" the rank of the conjunction in this list (number 1 is the closest).

4.2. Other Combinations of Planets

The below table shows some statistics for different combinations of planets. For convenience I've included the previously discussed combination (Mercury through Saturn).

5. How close together can the planets get?

In movies (such as Lara Croft: Tomb Raider from 2001) they sometimes show conjunctions of all (or at least many) planets where these planets line up exactly, or at least appear so close together in the sky that you can see them all as big disks close together through a powerful telescope, but in reality such an alignment never happens. We saw earlier that the smallest conjunction spread of Mercury - Saturn (as seen from Earth) between the years −13200 and 17191 is 2.7°, which is about 5 times the apparent size of the Moon, and 180 times as large as the apparent diameter of Jupiter in the sky.

The planets follow fixed orbits around the Sun, and cannot appear just anywhere in the sky. Figure 5 shows the orbits of all planets on 1 January (in ecliptic coordinates) in the sky. The location of the Sun is indicated by the small square. The planets cannot appear in other places in the sky on that date.
Fig. 6: Diagram of the Closest Possible Conjunctions

By shifting the planets freely along their orbits we can find the closest conjunction that is possible in principle at any given day of the year. Figure 6 shows the results of a search for the closest possible conjunctions. The numbers along the horizontal axis show the beginning of the corresponding months; for example, 2 = the beginning of February. The vertical axis shows the smallest conjunction spread that I found, measured in degrees. For each planet, the orbit was taken from the orbital period that started on 1 January 2000. (The results for planetary orbits from 1 January 3000 are virtually the same: the standard deviation of the difference is only 0.002, and probably mostly due to the search algorithm.)

The best visible of the closest conjunctions of Mercury through Saturn would happen near a 13 March at 29° east of the Sun, with a conjunction spread of 0.3°. The planets would then appear in the sky strung out along a line with a length of about 0.4°, which is only slightly less than the apparent diameter of the Moon, but is still 40 times greater than the apparent diameter of Jupiter, which would then appear biggest of the planets. So, even in the most favorable case (which has not occurred during the last 15000 years, and will not occur during the coming 15000 years, either) the planets are still far apart, compared to their apparent sizes.

6. Where are the planets now in the sky?

Through the Planet Positions Page you can find diagrams of the positions of the planets relative to the Sun, as seen from Earth, for some years before and after the year 2000. The diagrams below show the positions of the planets Mercury through Neptune for the years 2000 through 2003 and for 2040 and 2041, relative to the Sun. Find the desired time of the year on the horizontal axis, and then go straight up until you cross the line of the planet of interest. Then go straight to the left to find the associated time on the vertical axis. That number is the time difference between the planet and the Sun, measured in hours: the planet is due South that many hours earlier (for a negative number) or later (for a positive number) than the Sun, and the rising and setting of the planet are also approximately that much sooner or later than those of the Sun.